Are you crying for a dream?

Do you sometimes find yourself trying to figure out your life’s purpose?

According to the Lakota Sioux language the word for searching for one’s vision translates to “Crying for a Dream.”

I’d like to tell you about Jackie who had a successful career running a dance studio. Now in her mid-fifties she wanted to pursue other avenues that had long gone unexplored. She struggled with the dilemma of whether to give up or ramp up her studio.

Jackie’s daughter was leaving for college in the fall. Her son was already launched and living on the West Coast. Jackie feared the gap that was coming. Her beautiful little family would be living in three different states and the loss from not being together felt intolerable and terrifying.

She knew she would have to build travel into the coming years to visit her children which was only exacerbated by the fact that she hated being left alone in her lackluster relationship with her husband, Rob.

He was a decent guy that was more interested in his toys and computer stuff than he was in connection. Never wanting to break apart the family and being totally devoted to her children, Jackie decided to just stay with Rob, at least until the children were gone.

Now that the “baby” was leaving for college, a whole new world of possibilities was about to burst open. Dance studio? Marriage? Next steps? All of this was quickly becoming front and center.

Jackie knew that this was her time to start traveling more to visit her children and go to some of the exotic places she had always dreamed about—but she wasn’t sure about her vision for the future. Not. At. All.

Her husband, Rob who was several years her senior had recently retired and filled his time with golf and writing the novel he had always wanted to finish. Still, Rob was willing to join Jackie on some of the adventures she often talked about, but in Jackie’s heart she wasn’t sure if that’s what she wanted.

Have you ever had the feeling that you want a new start? That you want to bail on the life that you are living? 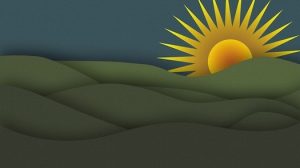 Jackie had a clear vision of what she wanted to do regarding her children and travel—but not too much else. She liked her studio and bringing music and dance into their lives, but even this didn’t quite seem like it was really doing it for her any longer.

Jackie needed to tap into what she needed to do next in her heart of hearts. She kept mulling over the possibilities and simply couldn’t find her north star.

Have you ever noticed that once you possess a clear, strong vision nothing can hold you back—the adversity, the obstacles, the disappointments don’t stop you from carrying on.

One thing was for sure with her soon to be empty nest Jackie needed to find her North Star.

Was she going to put the energy in to try and revive her marriage? Had her dance school run its course? Would she return to India volunteering her services for underserved girls?

The possibilities swirled in her mind and while excited sometimes—Jackie found herself feeling terrified on the unknown and not having clear direction.

Over time after her daughter was launched, and with some support and guidance, Jackie found her path. She decided to sell her business and work on her neglected marriage.

She and Rob decided to do some world travel together and found more common ground working with underserved communities in China.

Jackie had triumphed over her fear and anxiety by putting energy toward the creation of a new chapter filled with hope and possibility.

Do you sometimes struggle with knowing how to access or create the vision that best fits you and your unique gifts?

Once we are clear about our vision we need only continue to course correct.

When you’re clear about your path you can continue to ask yourself before taking action or making decisions: Is this decision in alignment with my vision?

Perhaps you’re struggling to find that vision. Maybe you’re burning to unearth your special dream and don’t know how to make this happen.

What is your vision for the coming years?

As always I loved to hear your comments.