What keeps you from getting the love and intimacy you want in life?

Dianne, a lovely, soft spoken school teacher of twenty five years, came to see me when she first sensed the disconnect in her marriage of thirty years.

Ken, Dianne’s husband was a brilliant scientist who travelled extensively for his work in environmental studies. He provided well for Dianne and their three children.

After their ‘baby’ left for college Dianne remained dedicated to her teaching career and sometimes stayed well into the evening at school preparing lesson plans and making sure that her students were getting nothing short of par excellence.

She longed for Ken to come home more often and would make sure that when he did, everything was as seamless as possible. Dianne made his favorite meals, doted upon him and looked forward to snuggling and making love. He was available for all of this but an almost imperceptible distance had grown.

During Ken’s absences Dianne often found herself lonely but she was grateful that she could channel her energies into her work. Now that the children were gone she began taking weekly piano and dance lessons as she had done before children.

The voice of Dianne’s loneliness and agitation grew stronger with time. She feared that Ken had fallen out of love with her or worse was having an affair.

Have you ever felt like something was off in your relationship and you couldn’t quite identify what it was? 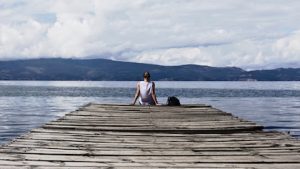 Dianne was stuck and felt that something had gone terribly awry but couldn’t figure out what. All of the options scared her.

Uncharacteristically Dianne summoned the courage to confront Ken. She wanted the truth and was not willing to settle for anything less. After all these years she knew she deserved better from Ken. She became more courageous and persistent until Ken had to deal honestly with her.

In the end Ken admitted to having an affair on and off over the past five years with his married secretary. Apparently they had recently agreed to part ways but the damage had been done—all around.

Now the question remained how should Dianne proceed? With her beautiful family in the mix, the answers were complicated.

Ken still wanted to keep the family and marriage intact. He begged for forgiveness, promising never to stray again. Dianne didn’t know what to believe.

How many other lies had there been over the years?

Although terrified and emotionally distraught Dianne knew that what happened next was hers to decide.

What would you do if your partner betrayed you and begged for forgiveness?

Dianne was at a crossroads and needed to explore in her heart and soul what was most important to her. She also felt like she needed a support system in place so that whatever she chose she’d be buoyed up rather than sinking into the depths of despair.

She knew that these years were precious and wanted to live them authentically and fully even if they looked different than she had always imagined.

What are you doing to assure that you are creating your best life?

As always, I look forward to your comments!