Do you love the feeling of moving with abandon—movement to get those feel good hormones kicking and through your body…and mind?

Molly had always loved skiing, dancing, yoga and all kinds of movement especially outdoors. Throughout her life she worked hard and played hard. She was hooked on the rush she experienced from moving her body in space—especially outdoors, finding her flow and her creative spaciousness.

Even after her twins were born Molly continued to make it a priority to run, workout and plan active vacations. She introduced her children to her passions and they too fell in love with the outdoors and an active life style.

When Molly hit 50 she began to feel pangs in her back, sometimes her knees too.

Eventually she discovered that there was significant deterioration in one of her knees and that she would require a knee replacement at 52 years of age. More than likely she would also need to replace the other knee as well.

Molly avoided the surgery until walking became unbearable and then she had no choice but to succumb. The recovery was long and hard and she dreaded the idea of replacing her other knee but knew it was just a matter of time.

Molly hit a new low in her life. Except for physical therapy the joy she had found in movement and exercise was severely curtailed indefinitely. She knew she’d get back to it—but when?? 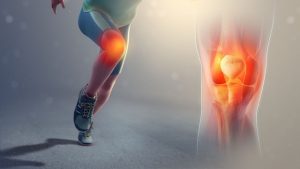 Have you ever felt physically out of control… suddenly thrust into the medical system placing your trust in doctors and health care providers you hardly know?

Molly felt her only way to take back control was to dig deep within. She began committing to a regular meditation practice. Every day she visualized her knees getting stronger and getting back to a full recovery without restrictions.

Her vision was to fully heal and continue her love of movement that had so predictably brought her joy over the years.

Molly was a model patient and her pain eventually quieted and mobility improved. However a certain low level of chronic pain persisted and, after repeated visits to a wide range of alternative and traditional health practitioners, Molly came to realize that she may have plateaued—for now and maybe for keeps.

With so many years hopefully ahead she couldn’t bear the idea of living in chronic pain. She explored some pain medication options but none of them quite did the trick.

Instead of wishing away the pain, Molly began to embrace the idea that there might always be twinges and bouts of provoked and unprovoked pain.

She came to terms with this reality, took the medication as needed and rather than fighting the pain she gradually began to make peace with her mind and body. Molly realized that this was the best way to carry on and make the absolute most of these years.

This meant she no longer tried to run from the pain, but that instead she acknowledged its presence and got on with her daily life. If anything Molly immersed herself more fully into activities and passions.

Moving through and ultimately beyond the pain turned out to be the best way to turn the volume down.

Did you know that chronic pain often creates a vicious cycle in which the body is affected and then leads to more stress, anger and frustration?

These emotions then increase pain levels making the stress worse. Eventually, depression kicks in. Running from the pain keeps the cycle going.

Stopping and making make peace with chronic pain can be extremely liberating. It can be just the ticket to making these years extraordinary despite the limitations that you/we may face.

As always, I look forward to your comments!