The Death of Perfection

Linda, a 42 year old attorney with two young boys, felt guilt and disappointment both on the job and at home. She never quite felt that she was where she needed to be at any given time. For all of her accomplishments, she felt like a failure as a lawyer and as a mother. She strove for perfection in all facets of her life, but now was finding that juggling motherhood and her professional life made this impossible. The standards that Linda set for herself were unattainable and therefore an innate form of sabotage. 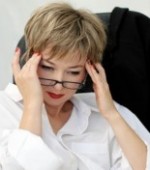 She made little time for her own self-care and felt exhausted all the time. Linda ran from home to work and back home again. The multitasking and quest for perfection was taking a toll on her physical and emotional self. Linda also began to isolate herself from her friends as she could not justify taking the time to make plans. Everything and everyone became a distraction, taking her away from her children and work. She began suffering from headaches and displayed early symptoms of depression.

Perfectionism is the belief that mistakes cannot be made and that the highest standards of performance in all aspects of one’s life must consistently be met. It is a state of mind where there exists an imbalance between one’s standards of success and the ability to achieve success. Worry, fear, guilt and self-doubt usually weave their way into the mind of the perfectionist. The pressure of this self-imposed demand can take a severe toll, mentally and physically.

Characteristics of a perfectionist

How to manage the frustrations of the perfectionist

Linda’s need for perfection came from early childhood messages. I listened to her story carefully and then reinforced that she had to give up this unrealistic fantasy of perfection. If not she would remain frustrated and unhappy. “This is the age of the death of perfection.” I assured her. It is a time in the evolution of women to adapt and integrate a kinder and gentler self-perception. The notion of the “good enough mother” or the “good enough lawyer” does not suggest that we compromise our integrity and commitment to our jobs, but rather that we embrace the multidimensional roles of our lives fully and authentically.

Eventually Linda found relief in the notion of being “good enough” and gradually gave up the notion of perfection. She found herself enjoying her family and work life once she eased up on the self-criticism and adapted an attitude of greater self-love.

Would love to know any tips you have for being less self-critical.

No one can make you feel inferior without your consent. ~ Eleanor Roosevelt

1 thought on “The Death of Perfection”